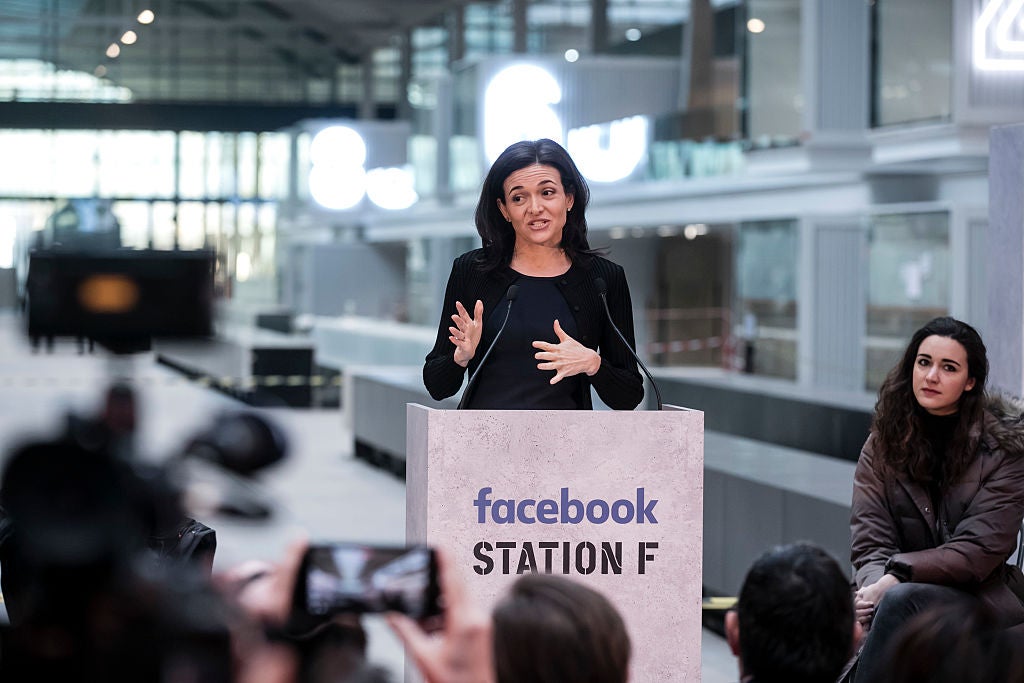 The likes of Facebook’s Sheryl Sandberg may have risen to senior roles in Big Tech companies, but there is still a severe shortage of women in decision-making positions in the industry. (Photo by Vincent Isore/IP3/Getty Images)

The future is being written as we speak, line by line of code – and it belongs to the men who write that code and decide the algorithms that will dictate much of what the next century will look like.

Women represent 47% of the US labour force, but this figure is still significantly lower for the tech sector. As Big Tech reimagines the world through technology designed and implemented largely by male employees, female employees only make up between 29% (Microsoft) and 45% (Amazon) of its workforce. And perhaps more significantly the percentage for technical roles is fewer than one in four (25%).

Peering into the boardroom, the statistics are more encouraging. According to the US Bureau of Labour Statistics, in 2021 women hold 26.5% of executive, senior-level and management positions in S&P 500 companies, which is on a par with Big Tech companies, although considering the level of influence these companies exert, this is still far from ideal.

If innovation and imagination are cornerstones of the tech industry, then it should be possible to apply them to this issue with the right kind of support behind it. If Big Tech set out to change the world, this is one area in which it did not succeed.

The technology sector has long struggled to attract and retain women. Long hours and a predominantly male working culture incompatible with domestic responsibility have seen technical roles largely filled by younger men. Until we have a conversation about the thorny issue of what goes on outside the office instead of within it, no amount of education, mentoring, corporate messaging and recruitment programmes will engender the change needed.

The Covid-19 pandemic shone a light on the issue of the domestic burden women face. A UN report in November 2020 found clear evidence that, although both genders saw their unpaid workloads increase, women bore more of the burden than men. Before the pandemic, women were spending on average three times as many hours on unpaid domestic and caring work. In 2018, the UN's International Labour Organisation reported that the 16 billion hours spent on unpaid caring every day would represent nearly one-tenth of the world’s entire economic output if it was paid at a fair rate. However hard the law and society reaches for institutional equilibrium, however publicly the battles rage for equal pay for equal work, the invisible domestic load is rarely accounted for.

The pursuit of male values in the workplace has brought women to the very point of exploitation they sought to avoid by placing upon them the double burden of primary responsibility for work inside and outside the home. Perhaps rather than focusing on equality through a male lens, we need to think more about restructuring a workplace historically designed to accommodate men.

Would it look like equality to give women a year’s paid maternity leave while their male colleagues trudge into work for the same period? Probably not. Which is why Big Tech has some of the most favourable paternity allowances of any industry sector (which, by the way, are tragically underused). However, pursuing equity may not be as effective as accommodating and accepting differences. And what of the cost? One of Big Tech’s unique strengths is its courage to burn through some impressive amounts of cash in the name of discovery, innovation and creating new frontiers. So isn’t it just a matter of priority? These priorities filter down from the male leadership, however.

A question of choice

If women are to participate more fully in the construction of the technological world, they need to be offered more choices other than to become tech wives or simply choose the blueprint set by their male counterparts' working lives. These may include hybrid work models that allow for maintaining the consistency of home and work, career paths that allow for older women to rejoin the workforce, and for younger women to have a career hiatus if they choose to spend time with babies and young children without inviting the career kiss of death.

In addition, if the profit motive is a driver then why not exploit this to elicit change for women? Women are a huge market – more women within the tech industry may result in new and more effective ways of reaching female customers. According to researchandmarkets.com, the 'Femtech' market is expected to grow by more than 13% between 2020 and 2026.

Moreover, consultancy McKinsey found in a 2020 report that diverse companies perform better, hire better talent, have more engaged employees, and retain workers better than companies that do not focus on diversity and inclusion. Despite this, women remain widely under-represented in IT roles.

The industry leading the most significant changes in our world should not be predominantly run by just one half of the population. To address this issue the tech world and beyond needs to enact a radical acceptance of difference rather than the blind pursuit of equality.