“We choose to go to the moon,” said President John F Kennedy in his historic speech in 1962 at Rice University in Houston, where he proudly proclaimed to the world that the US would land a man on the Moon before the end of the decade.

NASA’s Artemis program has launched, and the new space race has begun. With the space economy projected to reach $1 trillion by 2040, the opportunities for private sector companies have never been clearer. Houston, home to the world’s only truly urban spaceport and a burgeoning commercial space sector, offers tremendous opportunity for businesses to make their mark. Fill in your details to find out more.
By Greater Houston Partnership 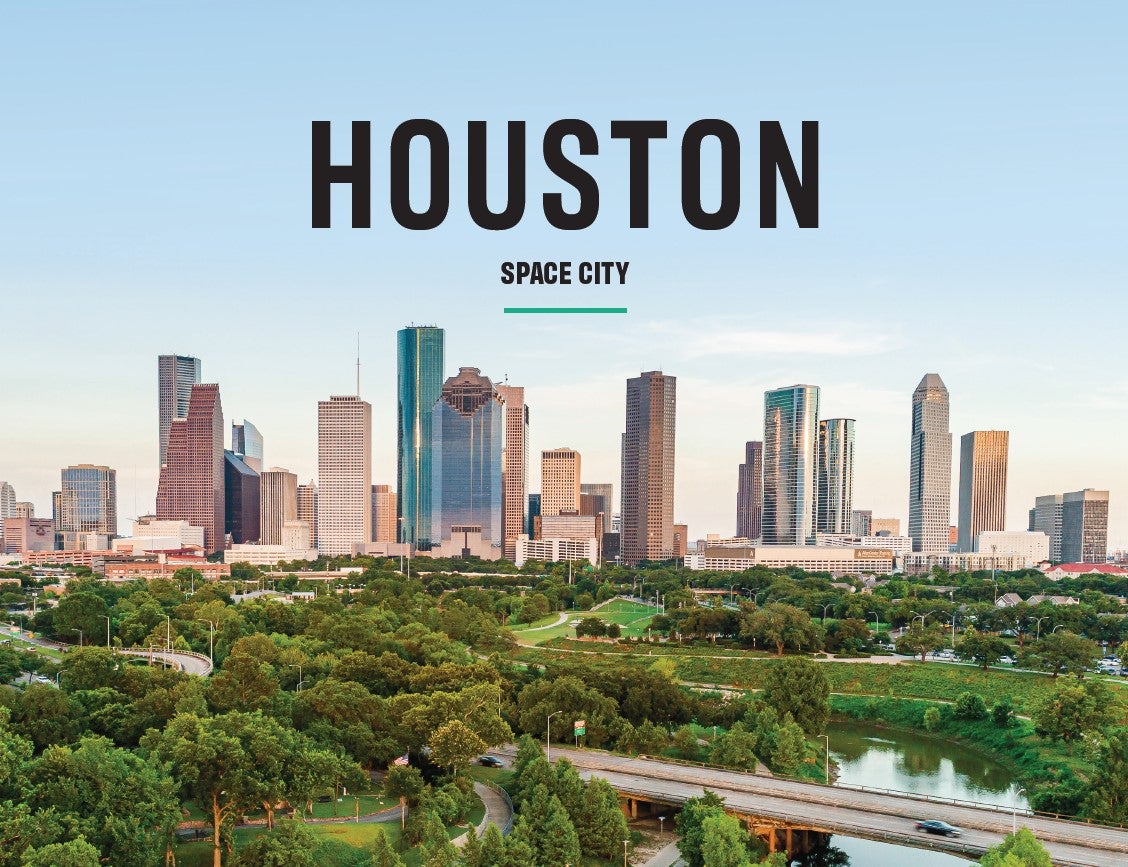 In 1969, Neil Armstrong, Buzz Aldrin and Michael Collins did just that. This bold challenge led to an unprecedented programme of scientific exploration. Since the Apollo missions, Nasa has positioned the US as a leader in space technology and exploration.

Six decades on from that speech, humanity is on the brink of further breakthroughs. According to GlobalData, the space economy could be worth more than $1trn by 2040. Deals in the aerospace sector are ramping up, and demand for business and consumer internet services are exploding as developing economies go online. The question now is not if humans will colonise the outer reaches of space but when.

With Nasa’s launch of Artemis 1 on 16 November, the new moon race has kicked into gear. Today, space exploration projects are migrating from government offices to company boardrooms. The race is on to become the Silicon Valley of the Cosmos.

For clues to the space capital of the future, analysts must look to the country’s emerging space ecosystems. They need to find examples of academic, political and commercial trailblazers collaborating to put the long-term value of space exploration ahead of the short-term costs. They need look no further than Nasa’s lead centre for research and development, astronaut selection and training, and mission control – the Johnson Space Centre (JSC).

Outer space and Houston – no problem

Kennedy’s choice of Rice University for his landmark speech reflected Houston’s standing as the epicentre of 20th-century space travel – and, amid stiff competition, it is increasingly apparent that the same is true today. Of the projected $1trn space economy in 2040, Texas alone is expected to grab a share worth nearly $60bn. Houston will have a strong claim on this judging by its existing aerospace industry. The city is home to more than 500 space aviation and aerospace companies, with trade in the industry worth nearly $3bn. It also boasts two international airports and one of the US’s 12 FAA-licensed Spaceports – the only one based in a major urban conurbation.

The JSC is the jewel in Houston’s cosmos-wandering crown. With 11,000 employees and an annual budget of nearly $5bn, the JSC is pioneering public and private partnerships to push forward human space exploration. Programme leadership for the International Space Station, the Orion Programme, Commercial Low Earth Orbit Programme, the Space Suit Programme and the Astronaut Office are all based at the site. “Our goal at Johnson Space Centre for the next 60 years is to make Texas a global hub of human exploration, such that any country or entity that desires to work in low-Earth orbit, around the moon, on the surface, further in the cosmos, can begin their next giant leap right here in Space City,” says Vanessa Wyche, the JSC director.

Nasa’s mission to put people in space – sustainably and at scale – points to a coordinated effort to cooperate with private companies. Many of these partnerships are taking place at the Houston Spaceport, which is serving as a catalyst for growth in the commercial space sector. The Houston Spaceport serves as a centre for collaboration and innovation for the aerospace industry. Its proximity and collaboration agreements with JSC offer innovative companies located there the unique opportunity to tap into Nasa’s assets and expertise. Remarkable work has been taking place since its inception. It has truly been a transformational project for the aerospace industry.

The pace of project launches at the Spaceport in 2022 alone reflects its ever-growing role in the commercial space race. Intuitive Machines, which is developing technology including lunar landers to enable exploration of the moon, is building a new 125,000ft2 facility at the Spaceport. The firm is experiencing dramatic growth in revenue and recently announced plans to go public. In May, Axiom Space broke ground on its new state-of-the-art headquarter campus at the Spaceport. The company – a space unicorn – will be based at the campus as it manufactures the world’s first commercial space station. In September, Axiom also announced plans to build a 146,000ft2 facility down the road in Webster that will house the company’s engineering operations. August saw the opening of Collins Aerospace’s 120,000ft2 facility at the Spaceport, including 10,000ft2 dedicated to Houston’s first-ever spaceflight incubator. Collins is working closely with Axiom to provide vehicle interface equipment and other hardware worth up to $3.5bn in the years leading to 2034. This will be rolled out by Nasa, the Artemis Programme and other commercial space projects. In addition, the San Jacinto College EDGE Centre recently celebrated the one-year anniversary of its facility at the Spaceport, offering aerospace training and career pathways within the industry.

Nasa enjoys an impressive pool of Houston-based entrepreneurial talent with which it can collaborate, but even more impressive is the enthusiasm with which these entrepreneurs collaborate with each other. At a recent State of Space event convened by the Greater Houston Partnership, one clear point that stood out was the role of Houston’s vibrant space ecosystem in fostering a spirit of cooperation. “The ability to have a place where government, academia and industry can come together and share ideas and innovation is incredibly powerful,” said Steve Altemus, president and CEO of Intuitive Machines, in reference to Houston Spaceport. Todd May, senior vice-president of science and space at KBR, a Houston-based technology and engineering giant, agreed. “Great cities – like great companies – understand that if you are still, you are probably moving backwards,” he said. “Houston gets it in that regard.” Some US space cities are inhospitable for newer entrants, with embedded conglomerates crowding them out of existence or gobbling them up. The Houston ecosystem takes a different tack. Common commercial spaces and an intricate network of partnerships means minnows and multinationals are constantly collaborating in new ventures to drive space exploration forward.

One outstanding example is the Texas-based Artemis programme, a focal point for activity in Houston’s space sector since 2017. The programme’s first flight was launched on 16 November 2022, underpinned by Houston’s ecosystem of human capital, commercial collaboration and political support. “With our Artemis Moon to Mars exploration programme, NASA will put the first woman and the first person of colour on the lunar surface and build a sustainable presence there and in lunar orbit,” says Wyche. “Then we will use what we learned to take the next giant leap, sending astronauts to Mars.” Houston‘s aerospace ecosystem is providing a springboard. In August 2022, Nasa signed Space Act Agreements with all the universities in the Houston area, including Rice, to promote joint projects alongside university academics. The region’s best and brightest graduates are likely to stick around, with the space agency providing unique employment opportunities to help them – and the industry – develop.

Houston is demonstrating what can happen when ambitious policymakers and an innovative business ecosystem combine: they can reach for the stars. Aerospace entrepreneurs should take note – there has never been a better time to set up a business in the city.

Artemis 1’s launch was the culmination of the region’s flourishing aerospace community. Lockheed Martin and Boeing are just two of the major Houston-based companies that collaborated to create Orion, the spacecraft sitting atop Artemis 1’s main Space Launch System. Orion will stay in space longer and return to Earth faster and hotter than any spacecraft in history. Aerospace companies that set up a base in Houston will be joining this ready-made ecosystem, abundant in investment opportunities as the push into outer space speeds up.

Houston’s reputation as a prime location for starting and growing a business has been on the rise for some time. Venture capital worth $2.6bn has poured into the city since 2015, with the average deal value quadrupling between 2016 and 2021. A total of 56,000 graduates from the region’s 20 universities and colleges join the labour force each year; the city already hosts 23,000 aerospace professionals, and that number is growing.

Meanwhile, public and private partnerships are deepening. The Ion – a 266,000ft2 structure providing a community space for entrepreneurial, corporate and academic leaders across Houston – was already a nerve centre for the city’s start-ups. Its vital role in the space race is ramping up. In 2021, the site launched the Aerospace Innovation Accelerator for Minority Business Enterprises, meaning businesses based there receive tailored support from Nasa to tackle aerospace-related challenges. Thanks to a new partnership with the Johnson Space Centre, a technology transfer centre at the site will soon give entrepreneurs access to Nasa’s IP portfolio. It will place a rocket booster under technological development in commercial and public space industries.

“At some point in the very near future, we are going to land human beings on the moon, and we are going to say: ‘Moon, Houston.’ This is the only city in the world whose name is looped into that scenario.” That was Nasa Astronaut Kate Rubins’ summary of Houston’s centrality in the next stages of space travel, during a recent State of Space panel discussion. Its thriving business networks, legion of highly-qualified professionals and world-leading start-up environment highlights that Houston is as much the world’s space capital now as it was in President Kennedy’s day – with a space ecosystem unparalleled anywhere else on the planet. Its growth is sure to continue. Companies in the region today are ideally placed to become the Axiom Space, Intuitive Machines and Collins Aerospace of tomorrow.

The Greater Houston Partnership offers advice and support to companies looking to invest in the region and unlock the opportunities of its thriving aerospace industry. Download the free whitepaper on this page to find out more.

NASA’s Artemis program has launched, and the new space race has begun. With the space economy projected to reach $1 trillion by 2040, the opportunities for private sector companies have never been clearer. Houston, home to the world’s only truly urban spaceport and a burgeoning commercial space sector, offers tremendous opportunity for businesses to make their mark. Fill in your details to find out more.
By Greater Houston Partnership