The Costa Rica Aerospace Cluster was set up in 2010 to “enhance [aerospace] capabilities in Costa Rica and achieve sustained growth for the entire sector”. Now home to an ecosystem of more than 30 component manufacturers and service providers exporting to nearly 40 countries worldwide, it has certainly achieved take-off.

Carving out a niche for aerospace within Costa Rica reflects a wider growth in high-value, specialist manufacturing within the country. Costa Rica’s advanced manufacturing headcount has tripled in the last two decades, going from 4,500 employees in 2000 to 11,500 in 2021.

The World Economic Forum consistently ranks Costa Rica among the top exporters of high-tech products in Latin America. That is, products with high R&D intensity in areas like aerospace, computers, pharmaceuticals, scientific instruments and electrical machinery.

The engagement of both multinational and SME companies in the Costa Rica Aerospace Cluster means that the country now has the capability to engage, not only in all stages of the manufacturing cycle but also to innovate, research and develop: from requirement analysis, through detailed design, prototype and testing, to deployment, maintenance and evolution.

The World Economic Forum consistently ranks Costa Rica among the top exporters of products with high R&D intensity in Latin America, and that includes the aerospace sector. 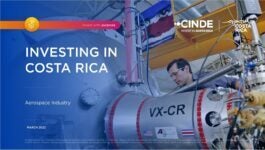 Ad Astra commissioned the first hydrogen generation and storage plant in Central America, and its success in the aerospace industry has been recognised by the American Institute of Aeronautics and Astronautics, which selected the company’s Variable Specific Impulse Magnetoplasma Rocket as one of the top ten breaking edge technologies in the aerospace field.

Another central player is Tico Electronics, a contract manufacturer that has grown steadily since its foundation in 1995 to employ over 500 people. Tico specialises in the manufacture and distribution of specialist items including wire windings, cable harnesses, hydraulic assemblies, temperature sensors, brushings and backshells.

According to the president of the Costa Rica Aerospace Cluster, Marko Miletta, cooperation between businesses of all sizes has benefitted not only multinationals but smaller companies hungry for sales growth and wider distribution.

“The cluster has been successful in creating a local supply chain through which smaller companies benefit from connections and access, while larger companies benefit from niche expertise and businesses who are agile enough to deliver products and services quickly,” Miletta says. “As recently as 2016, there were only about four or five companies in the cluster, and the biggest challenge we had then was convincing people that aerospace coming out of Costa Rica was competitive, especially when multinationals were opting to headquarter elsewhere.

“The first thing we had to do was to get everyone certified, so that when we approached Fortune 500 investors or people who could have a stake in the Costa Rican aerospace industry, we had a trump card over other regions. It used to be that, as recently as two years ago, only three aerospace companies were certified. Now we have 13 with AS9100s as well as two companies who are Nadcap certified.”

Indeed, as a direct result of the efforts of the Costa Rica Aerospace Cluster, the country now boasts the largest group of home-grown outside the continental US AS9100 and Nadca-certified companies of any country on the planet.

A niche for creativity

Costa Rica’s unique tax infrastructure has of course enticed much foreign investment over the years, with service and manufacturing projects in the country’s free trade zone regime offering income tax payments of as little as 0% for the first eight years of a company’s trading. Thereafter, it goes up to a competitive 15% for the next four years.

This is not the whole story, however. Costa Rica’s young, industry 4.0-educated workforce, its status as a key nearshoring destination for countries like the US, access to the English language and a healthy collaborative environment have fostered the growth of key specialisms, particularly within aerospace.

One example is LeoLabs, a company that specialises in the manufacture, production and distribution of space radar. In April 2021, only nine months after breaking ground in the country, the company launched its Costa Rica Space Radar, described by co-founder and CEO Dan Ceperley as “the most advanced commercial space radar of its kind anywhere on the planet”.

LeoLabs identifies its overarching mission as “empowering the new space race”. With the growth of private space ventures like SpaceX, Blue Origin and Virgin Galactic, LeoLabs’ statement of intent feels more pertinent than ever. Indeed, with an executive team that has “flown three missions to LEO, built five radars and ten satellite payloads, run two scientific observatories, launched a new programming language and served on console for multiple launches”, there is no shortage of expertise within the business.

Another example is Avionyx, a specialist in full software life cycle engineering services for avionics systems including electric vertical take-off and landing, urban aviation mobility rotorcraft and fixed-wing aircraft, which has been in Costa Rica since 2005. Rafael Montero, director of quality & administration at Avionyx, says that since starting with only three people, and having little knowledge or expertise of the processes involved in getting established within the aerospace industry, involvement with the Costa Rica Aerospace Cluster and CINDE has enabled the company to become certified and grow its workforce to almost 100 engineers.

“We are a proud member of the Costa Rica Aerospace Cluster,” Montero says. “It has been very useful in demonstrating to the world that Costa Rica has all of these capabilities that investors may not know about.

“Because many members within the cluster fulfil a different aerospace need, a lot of us have crossover when it comes to clients, and because those clients know that we know and we collaborate with one another, thus fostering trust that Costa Rica as a whole can deliver the full aerospace package.”

It is this type of collaborative, quality-driven approach that is enabling ecosystems across Costa Rica’s manufacturing space to set their sights higher than ever.