In 2021 there were 1,773 graduates in industrial engineering in Costa Rica, with the number growing at an impressive average of 8% per year. (Photo courtesy of CINDE)

Advanced electronics are the platform upon which modern life is built. Increasingly, they are also a prominent support platform within the Costa Rican economy, with the manufacturing of electronic components an established and evolving growth segment.

A number of the international electronics companies can trace their roots in Costa Rica all the way back to the 1960s, but, with smart manufacturing emerging as a key area of investment within the country, and growth in R&D operations, when it comes to complexity and ambition, much of the work being carried out is fast becoming unrecognisable to that of just a few years ago.

While US enterprises have traditionally been the dominant international presence within this landscape – and continue to build out their Costa Rican businesses, both in terms of scale and new disciplines – companies from around the world have increasingly followed in their footsteps.

From food and agri-tech, to the next gen of electronics, robotics and yes... rocket science, this white paper looks at recent efforts to grow Costa Rica's value proposition in the electronics sector. 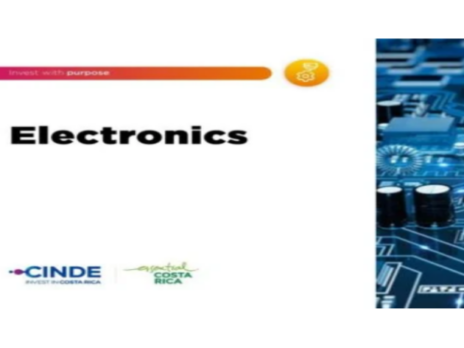 Earlier this year, Samtec announced an additional 200 hires in Costa Rica, adding to an existing team of 1,100, citing significant growth in global demand for the production of its electronic devices. The multinational connector company, headquartered in the US, boasts more than 40 international locations and sells into more than 125 countries. With total global revenues of $800m in 2020, 20% of its global production is now reliant upon Costa Rica, where it has had a presence for the last 15 years.

“In 2006, Samtec established Costa Rican operations with the idea of maintaining a manufacturing plant close to the US,” José Sánchez, general manager at Samtec Costa Rica, said upon the announcement. “The country was also chosen for its English level and literacy rates, and legal and personal securities.

“In recent years, Samtec has grown not only in production but also in its corporate services. Currently, we offer corporate information systems, purchasing, R&D, and drafting, among other services. Additionally, Costa Rica is at the centre of our corporation’s automated processes, as this is the plant with the most automated machines.”

Samtec is far from the only electronics company to have made Costa Rica a key manufacturing base – and to have scaled up the scope of its operations. Bourns, for example, a global manufacturer of automotive electronic components, circuit protection, magnetic and resistive products, and sensors and controls, ranging from potentiometers to switches and resistors, now employs nearly 1,000 people in its facility in Belén in the Heredia province. It founded its local operations way back in 1979.

Global developer of physical infrastructure management solutions Panduit employs more than 1,000 workers at its plant in Grecia, having first come to Costa Rica in 1996.

Both now boast capabilities across an array of advanced applications, including robotics, 3D printing, AI and automation, and new product development.

As the experience of these companies shows, Costa Rica is not just one of Latin America’s most favoured investment destinations for electronics manufacturing, but also a destination for scaling up value-added processes and services. This is due in no small part to the quality of its workforce, and the sustainability and resilience of its economy, as well as a dynamic business environment.

In the smart manufacturing sector, the number of international electronics companies operating in Costa Rica has increased by a factor of 1.5 since the turn of the century and employment has more than doubled. Electronic component manufacturers including Electrotechnik and Huber+Suhner are among the more recent arrivals, as are consumer electronics companies Noxtak and Matthews International, and contract manufacturer East West.

In 2020, despite the impact of the Covid-19 pandemic, electric and electronics exports from Costa Rica amounted to almost $520m. Electric cables and electric materials accounted for more than 50% of that figure, with integrated circuits and electronic microstructures, electrical resistors, and electrical batteries also making healthy contributions.

Investment in the education of a skilled and versatile workforce, and the ongoing growth of an advanced electronics ecosystem in which to place them, has contributed massively to the country’s ability to draw further international investment and boost its exports of advanced electronics components.

Back in 2015, there were 1,285 graduates in industrial engineering in Costa Rica, but by 2021 that figure has leapt to 1,773, with the number growing at an impressive average of 8% per year. Similarly, the number of people graduating in electrical engineering has grown by 46% over the last six years, and is estimated to hit 340 annually by 2024.

Around 3,000 people secure IT degrees each year in Costa Rica in disciplines as diverse as computer science, software engineering and computer engineering. (Photo courtesy of CINDE)

Add to this around 3,000 people securing IT degrees each year – in disciplines as diverse as computer science, software engineering and computer engineering – and it is clear that the country has an abundance of knowledge and skills that can be put to work in the manufacturing and development of cutting-edge products.

There is no denying that cost is certainly a key factor in the nearshoring and offshoring strategies developed by global enterprises.

Overseas businesses that are looking to develop electronics manufacturing capability in Costa Rica can do so in one of the country’s economic free zones. Businesses setting up in a free zone benefit from an income tax exemption for a period of ten years.

In the wake of the Covid-19 pandemic, which has exposed the vulnerabilities of the international supply chain, the value of nearshoring has become clearer than ever before. Costa Rica’s location so close to major North American markets – not to mention the country’s trade agreements and partnerships that provide preferential access to 75% of global GDP – enables it to act as a key link in a smooth cross-border supply chain.

Factor in the business-friendly environment with economic and political stability, ready access to talent and, crucially, a burgeoning smart manufacturing sector, and it is clear why this industry only looks set to grow further in the years ahead.