When it comes to the environmental agenda, Costa Rica leads from the front. Its high level of commitment to its people and the planet has made the Central American nation punch well above its weight when sustainability is discussed on the global stage. Such efforts also play a significant – and growing – role in framing the country’s value proposition as a destination of choice for foreign direct investment; helping companies grow better, rather than at all costs.

In 2021, Costa Rica strengthened its position as a world leader on climate by spearheading the High Ambition Coalition alongside Britain and France. This coalition has now swelled to more than 90 members and gained a vote of confidence with the US joining in April 2022. The coalition’s central goal is to protect and conserve at least 30% of the world’s land and ocean by 2030.

As ESG metrics play a growing role in investment decisions, international enterprises, either already established, or considering Costa Rica as their next step, stand to benefit from such a progressive culture of sustainable stewardship.

A well-established nearshoring destination, offering geographical proximity to North America, as well as a highly skilled workforce, Costa Rica is also helping to dictate thinking around “greenshoring”, where sustainability and its impact increasingly drive investment decisions.

Costa Rica is your strategic ally to generate impact and achieve your sustainable development goals. Sustainability has been our road map for more than 60 years.

Download this white paper to find out why Costa Rica is the ideal location for reaching sustainable productivity. 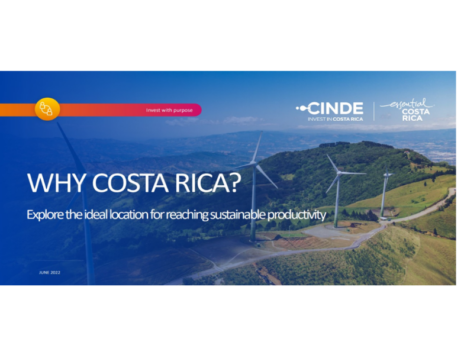 VMware, a leading provider of multi-cloud services, has been in Costa Rica since 2012, with its operations growing significantly in both headcount and added value over the years. The ability to contribute to and take advantage from a dynamic tech ecosystem has helped VMware deliver that growth, and also due to the country’s commitment to environmental standards.

“VMware is always looking to invest in places that align to its culture and values and without a doubt, environmental stewardship and emissions reductions are important pillars in VMware’s DNA,” says Jancy Castro, VMware’s Costa Rica site leader. “Sustainability is core to our values and future success.

“We also launched VMware’s Sustainability at Home programme, led by sustainability ambassadors in each region. These are teams of passionate VMware employees who volunteer to engage with their communities by partnering with companies providing sustainable products and services. Educating and empowering everyone to live sustainably at home are key to these partnerships. Discounts through the Sustainability at Home programme include renewable energy and residential solar, composting and plastic-alternative products”.

Cloud computing is incredibly energy intensive. Large data centres that store countless terabytes of information must draw vast amounts of power to sustain themselves. This power needs to be backed up by a failsafe and instantly available secondary source. However, the environmental issue of requiring such high levels of electricity can be addressed if that power is generated by sustainable methods. Costa Rica’s electricity grid is 99% powered by renewable sources such as air, wind, water, sun and geothermal. This is a hugely advantageous prospect for investors in energy-hungry sectors that are keen to minimize their emissions footprint.

“Now, think about zero carbon clouds,” says Castro. “That is pretty much server rooms powered by green energy. Costa Rica can be that sustainable cloud services partner, with guaranteed renewable energy sources. This is the future: we can make the internet more sustainable.

“We have an opportunity to decarbonise digital infrastructure across our customer ecosystem, supply chain and operations. VMware will help accelerate this future by supporting zero-carbon clouds powered by renewable energy.”

VMware has a current goal of reaching net-zero carbon emissions for its operations and supply chain by 2030, with programmes to also help customers decarbonise their digital infrastructures by partnering with VMware Zero Carbon Committed providers. A growing presence in Costa Rica is a central pillar in this ambition – “Being installed in a country that already provides energy from renewable sources is key,” says Castro.

VMware does not stand alone in this endeavour. In fact, Costa Rica is now home to more than 20 RE100 companies (enterprises committed to going “100% renewable”).

“Sustainability is innovation’s new frontier and being able to establish operations in a country that is also aligned to that thought makes it a perfect match,” says Castro. “From renewable energy to carbon-neutral service suppliers, Costa Rica offers easy access to operations expansion without compromising sustainability goals.”

Despite covering only 0.3% of the Earth’s surface, Costa Rica is home to 6% of its biodiversity, while 26% of Costa Rica’s land is protected under legal entities such as national parks, natural reserves and conservations. Thus, it bolsters a variety of landscapes ranging from lush dense forests to mountains and nutrient-rich volcanic soils. Moreover, the country possesses both Atlantic and Pacific coastlines, a perfect scenario not only for picture-perfect beaches, but also exports.

Once plagued by high levels of deforestation, Costa Rica managed to double its forest coverage in the last three decades. Now, more than half its landmass (59%) is occupied by dense forest coverage and maintaining its ecological variety has been a key driving force in Costa Rica’s commitment to environmentalism.

All the latter comes into fruition with the country’s sustainable productivity value proposition: People, Planet and Prosperity. The country’s natural conditions are the bedrock upon which the sectors of agribusiness and new materials are establishing a growing foothold. Such focus on wellness and health also influences more traditional medical sectors and operators.

“Being a responsible corporate citizen means working on all dimensions of influence that we have as an organisation dedicated to health,” says Alberto Meseguer, site director of operations at Medtronic Costa Rica. “The well-being of the communities of which we are a part are decisive in decision-making and this guides our commitment to join efforts that contribute to that agenda.”

Medtronic is one of the world’s largest medical device manufacturers, producing devices and therapies that help treat more than 30 chronic diseases. Like VMware, the company has committed to reaching 100% carbon footprint-free operations by 2030 and has invested in Costa Rica to help achieve this goal.

Medtronic has already broken new ground in sustainability by having one of its Costa Rican plants achieve LEED Platinum Certification. This is the highest possible sustainability rank for a facility, and it is the first medical device facility in Latin America to achieve the international standard.

“LEED is a holistic system that doesn’t simply focus on one element of a building, such as energy, water or health,” says Meseguer. “Instead, it looks at the big picture by considering all the critical elements that work together to create the best possible building, following the highest sustainability standards.

“One of our differentiating values in Costa Rica is the talent of our people. We currently have more than 600 employees in the manufacturing plant with a high level of specialisation. In addition, in Costa Rica we have a strong electrical network that has allowed us to increase productivity.”

For Medtronic, Costa Rica has represented the ideal investment opportunity. “Operating our manufacturing plant in Costa Rica has been very satisfactory in terms of productivity, efficiency and costs,” Meseguer continues. “That is thanks to the availability of excellent technical talent, the free zone regime, the outstanding electrical infrastructure and logistics.”

In a corporate climate where businesses are attaching unprecedented value to the impact of their investments in terms of sustainability, Costa Rica continues to lead the way by attracting some of the world’s largest corporations to its sustainable, ecological and economically diverse shores.