Costa Rica is emerging as a growing site of interest for the world’s semiconductor manufacturers as they look to address a widespread shortage as a result of Covid-19, the ongoing US-China trade war and drought in Taiwan. (Photo by Gorodenkoff/Shutterstock)

From cutting-edge innovations such as AI, autonomous cars and quantum computing, to our ever-growing dependence on faster wireless connectivity, semiconductors are the key to a smarter future. Increasing production and securing the supply chain are global priorities.

In late 2020, however, the world began to experience a widespread shortage of semiconductors. This was put down to three main factors: Covid-19 both shutting down production facilities and driving unprecedented rates of digital adoption; the ongoing US-China trade war; and drought in Taiwan, the dominant force in the outsourcing of semiconductor manufacturing.

Indeed, the world has traditionally turned to Asia for mass production of semiconductors, but an overdependence on one country or region poses significant risks. Major producers, particularly in the US, are looking at alternatives with increasing urgency, seeking out economies with the necessary levels of expertise, experience, infrastructure, and geographical and cultural proximity. Based on these metrics, Costa Rica is emerging as a growing site of interest for some of the world’s largest semiconductor manufacturers.

Costa Rica is a breathing lab for medtech solutions. Learn more about investing and setting up your operation in Costa Rica. 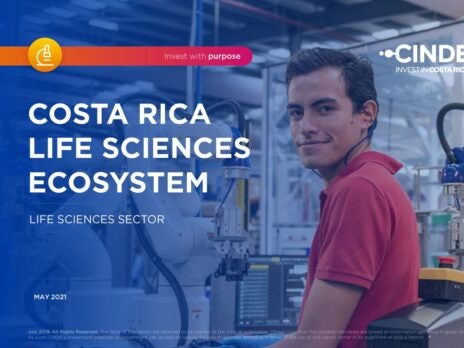 In December 2020, Intel, the world’s second-largest supplier of semiconductors, announced a $350m investment to restart the assembly and testing of microchips in Costa Rica, having moved its Costa Rican manufacturing operations to Asia in 2014.

In July 2021, in direct response to the global semiconductor shortage, those figures were revised upwards. Intel would now invest $600m and recruit 600 people – a move the country’s president, Carlos Alvarado, called “an extraordinary sign of confidence in Costa Rica and in our human talent”.

Intel also increased investment in new equipment and technology to $40m for its R&D labs, dedicated to designing, prototyping, testing and validating integrated circuit solutions. For this specific area alone, 150 people have been hired in the last year.

“Today, Intel Costa Rica employs more than 2,700 people,” Timothy Scott Hall, manager of government affairs for Intel Costa Rica, explained in a recent announcement. “This is the same number that we had in 2014, but with the human talent in more diverse and specialised areas. With their skills and professionalism, they are helping to consolidate the operations in the country. Indirect employment is generated in our operations for close to 3,800 people.”

Such faith in the country’s capabilities is born from Intel’s long-standing experience in Costa Rica. The country’s semiconductor industry began back in 1997, when Intel first opened an assembly and testing site for microprocessors. Even after moving manufacturing overseas in 2014, Intel maintained its presence in shared services and engineering, and continued to operate a Megalab, which played a key role in the company’s R&D strategy.

Intel reopening its manufacturing facilities and expanding R&D represents a glowing testimonial for the country’s depth of talent, but also a desire to bring operations closer to home. The US remains the world’s largest global market for semiconductors – and Costa Rica’s free trade agreements are crucial to improving the cost-efficiency and security of Intel’s global semiconductor supply chain.

“Intel ratifies Costa Rica’s position as a strategic variable for its global operations,” remarked Jorge Sequeira, managing director of CINDE. “Increasing its investment for assembly and testing activities even more, as well as equipment and staff for the Research and Development Center, strengthens the country’s position as an intelligent manufacturing platform that efficiently responds in industry 4.0.

“In addition, it shows that Costa Rica is the best option for nearshoring in the Americas, which is backed up by an ambitious proposal related to the value of the people, the planet and prosperity.”

Intel is the biggest player in the market, but it is by no means the only significant name in Costa Rica’s semiconductor industry, as the country’s high-value electronics sector continues to grow. Qorvo, which produces high-performance radio frequency solutions for advanced wireless devices, has had operations in the country for 20 years, and currently employs more than 300 people at its facility in the Metropolitan Free Zone in Heredia. In 2020, the US-headquartered semiconductor company announced plans to expand its Costa Rican operations, necessitating the addition of 70 new hires.

“We are very excited about the expansion and modernisation plans by acquiring advanced microelectronics assembly lines,” remarked Gerardo Chaves, general manager of Qorvo Costa Rica, at the time of the announcement. “We can ensure a stable operation that generates sources of quality employment for many Costa Ricans thanks to different factors.

“For example, the availability of qualified personnel, the capacity, and experience developed over 20 years of continuous work in Costa Rica, and the support we have received from institutions such as CINDE, Comex and Procomer.”

Cited by the Economist Intelligence Unit as one of the countries best-placed to compete with Asia as a key link in the global supply chain, Costa Rica promotes a triple bottom line in its efforts help the world’s most sophisticated manufacturers meet the world’s ever-growing hunger for semiconductors: “People, Planet, and Prosperity”.

The global pandemic may have highlighted the vulnerabilities in the semiconductor supply chain, but it has also shone a light on the importance of economies outside Asia playing a larger role in their manufacture. As companies seek to consolidate operations and bring manufacturing closer to home, Costa Rica looks likely to play a key strategic role.