In June 2022, the government of Belgium, which is made up of nine federated units, agreed on the text of the Cooperation Agreement, the country’s first national screening mechanism for inward foreign direct investment (FDI).

The Belgian screening mechanism will apply to investments from outside the EU in areas such as critical infrastructure (including energy, healthcare, media and defence), technology and production assets that are “essential to our security and technology of strategic importance”, according to De Croo. These assets include AI, robotics, semiconductors and nuclear technology; the provision of basic goods related to food security, energy or raw materials; access to or control over sensitive information, including personal data; the private security sector; and the media.

To perform the screening, an Interfederal Screening Committee has been set up, composed of representatives of the various government bodies and with the administrative support of the Federal Public Service Economy.

Policy
Florida stands to gain in next phase of data centre investment
Policy
Opinion: COP27 concludes with loss and damage fund but no increased mitigation ambition 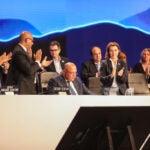 Any investment of more than a 10% stake in a company (or 25% of the company’s shares) will trigger the mechanism, depending on the area of investment.

The cooperation agreement means Belgium becomes part of an EU framework. European regulation on FDI screening was adopted in 2019, and included a mechanism for cooperation between the member states and the European Commission for am FDI screening mechanism.

“Belgium is an open economy and foreign investment is and will remain very important for our country,” said De Croo. “Yet we must not be naïve, especially in sectors of strategic importance such as energy, healthcare and the media. It is necessary to check that foreign investments do not compromise our national security.”

How much does FDI contribute to Belgium’s economy?

According to the UN Conference on Trade and Development’s World Investment Report 2021, Belgium attracted $8.4bn of FDI inflows in 2020, significantly higher than the $2.9bn brought in in 2019.

Predictably, given the proximity and partial common language of the two countries, France was the largest source of FDI into Belgium across 2019 and 2020, contributing a total of 79 greenfield FDI projects.

The US came second with 72 projects, while the Netherlands – also a neighbouring country – the UK and Germany followed with 44, 44 and 29 projects, respectively.

The logistics sector was the most attractive for inward FDI in Belgium during the two-year period, bringing in 74 projects. Other popular sectors in the country were software and IT services (45), business and professional services (43), food (36), renewable and alternative power (35) and tourism (22).

The introduction of more stringent FDI regimes has been on the rise across a number of countries due to an increase in protectionist politics and as a result of Covid-19. Given that a country such as Belgium, largely considered to be liberal and investment friendly, is following down this path, it seems that this trend is likely to continue.