Stockholm’s brand value is strongly linked to its tech sector, which gives the Swedish capital a ‘cool’ reputation. (Photo by Jonathan Nackstrand/AFP via Getty Images)

Companies are key actors in the relatively small group of stakeholders that dictate the characteristics and brand values of the cities and regions we live in.

Foreign investors have a big influence on a location from a reputational and even psychological perspective for its residents, workers and visitors. The presence of specific leading companies is a signifier of status – the corporate brand extending its brand recognition and value to the city or region it is located in. The brand value and how it influences a place’s reputation varies by sector: the security of financial services (Canary Wharf); the seriousness and intellectual prowess of pharma (Cork); the coolness of tech (Stockholm); the productivity and precision of the automotive sector (Munich); and the playfulness of creative companies (Montreal).

Every company that decides to locate in a city or region brings confidence, renewal, and sometimes hope. Conversely, if a company chooses to leave, the impact can be devastating and has the opposite psychological effect. Some companies have such a dominant position and become so engrained in the fabric and characteristics of the place, they simply can’t leave; they become too big to fail, or at least not without creating emotional and sometimes political ructions – think Nissan in Sunderland. Companies that do leave can be exposed – Ford’s withdrawal from Bordeaux had all the hallmarks of a messy divorce.

As with most things in life, there has to be a quid pro quo but also a moderated approach.

In return for selecting a city to locate in, investing companies are often directed to business districts where they can associate with their peers and open a new office that aligns with their brand reputation. They also help to build the reputation of the location – think converted docklands everywhere with glass and steel monoliths mapped out by planners and developers. These are the very districts that are suffering the most during the pandemic, proverbial tumbleweed territories.

The residents of Queens recognised the Amazon headquarters ‘win’ would also be disruptive.

Traditionally, the price companies paid depended on the development stage of the city and the life cycle of the company. Bigger cities with a good skills supply that are more attractive to companies command bigger prices. For too long, the business zones designed for investors have been seen as a signifier of success for a location and we even see the creation of new cities or districts based on this one-dimensional, corporate-orientated formula. Build it and they will come – but as we know, they don’t. Companies locate for skills.

Governments, however, continue to incentivise companies to locate in areas where they can be perceived as game changers. Pre-Silicon Roundabout, there was a thriving creative hub of indigenous enterprises in the east London area, but the ‘win’ of the Google campus disrupted the dynamic. Creative companies were priced out. The residents of Queens recognised the Amazon headquarters ‘win’ would also be disruptive.

Companies that are investing in a location are in a position of power and can change the nature of place. They need to use that power wisely, not least as they don’t want to end up as a political and emotional totem.

Governments need to take a more balanced approach to how far they go to accommodate the needs of investors in a city. There is so much more to a city than the business districts, as we have found out during the Covid-19 pandemic. The cities that will recover fastest are those that have a good mix of workers, residents and visitors – a balanced approach. These are cities where residents have not been priced out by companies as part of a confidence trick.

Development needs to be considered from a different optic. Growth for growth’s sake is coming to an end.

It is clear that in the future companies will not need the office footprint they once did, but planners and commercial developers have to catch up. Cities aren’t just for business, they are for living. Companies are mobile and will come and go and pivot according to their commercial objectives, as they should.

The city is not mobile but it is dynamic. Locations need to stop organising around the needs of companies, or at least not to the extent they do so now. Development needs to be considered from a different optic. Growth for growth’s sake is coming to an end. Success for a place cannot be predicated on the corporate skyline. For companies, this brings less risk and more choice too.

We all own the city. 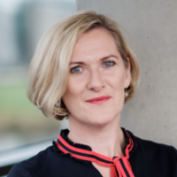