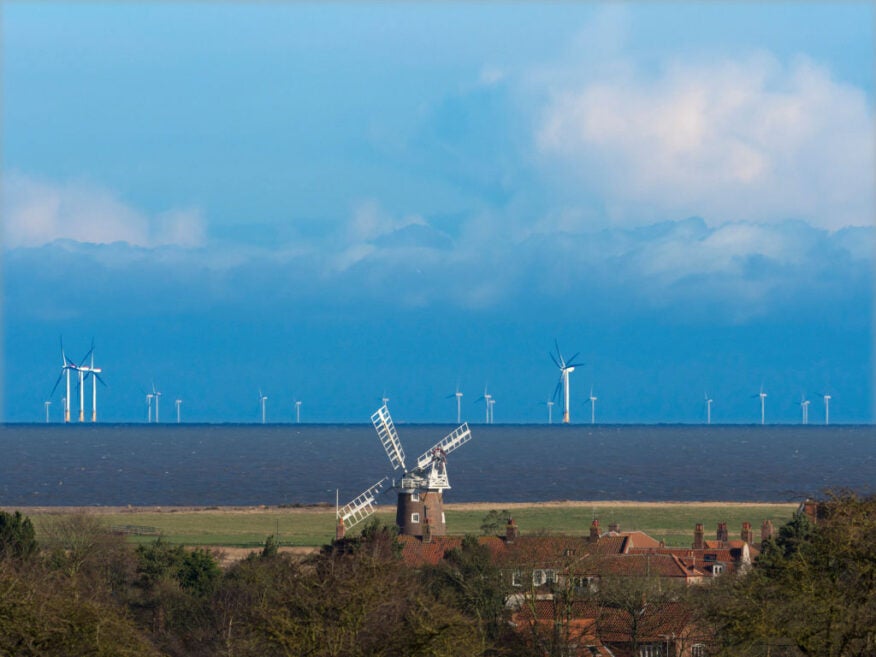 East Anglia is one of many locations in the UK that will benefit from the sustainable FDI announcements made in October by the country’s government. (Photo by Gary Smith/Loop Images/Universal Images Group via Getty Images)

International investors are set to inject £9.7bn ($13.4bn) in sustainable investments into the UK, which will lead to the creation of 30,000 jobs, according to the country’s Prime Minister Boris Johnson.

Johnson announced 18 new trade and investments deals in sectors that support green growth and sustainable development during the Global Investment Summit on 19 October.

This announcement is important for the UK for four reasons: it provides a path towards economic growth in a post-pandemic environment; it shows the UK’s attractiveness as an investment destination following its departure from the EU; it will show that foreign direct investment (FDI) can still generate jobs in the country; and it will put sustainable industries at the forefront of investment attraction in order to help the UK to ‘build back better’.

First, the £9.7bn in inward FDI is crucial for boosting the country’s economy in the post-pandemic world. More specifically, Johnson said that the new investment will power the country’s economic recovery, creating thousands of jobs and helping with the country’s ‘levelling up’ ambitions, according to a press release.

Second, such investment will highlight the attractiveness of the UK as an investment destination following its departure from the EU. This is important as data shows that FDI into the UK has fallen since the Brexit vote in 2016.

Third, the creation of 30,000 jobs will further spur economic growth. The press release states that jobs will be created across the whole of the UK, and will not be concentrated in London and the South East region. This is important as there has been a decline in jobs created by FDI since the Brexit referendum.

Finally, it is good news for the UK’s green energy revolution that the investment will be in sectors that support responsible investing, ESG and green growth.

The UK government recently launched its net-zero strategy in October, setting out how the country will deliver on its commitment to reach net-zero emissions by 2050. The strategy includes measures to create a secure, home-grown clean energy sector, support businesses and consumers to transition to clean power, create thousands of well-paid jobs and unlock investment.

• Prologis intends to invest £1.5bn in the UK over the next three years, developing net-zero carbon warehouses that will support about 14,000 new jobs across London, the South East and the Midlands.

• Viridor, owned by US company KKR, plans to invest up to £1bn in cutting-edge decarbonisation technology across five of their UK sites, creating 1,180 jobs. Viridor aims to become the first net-zero waste company by 2030, and this new investment will also reduce fossil emissions at its UK sites by up to 90%.

• Eren Paper, owned by Turkish conglomerate Eren Holding, is investing £500m to acquire a mill in Shotton, North Wales, and convert it to produce cardboard manufactured from paper waste. The mill will be powered by biomass fuel and the investment is expected to create approximately 300 jobs.

• Peer-to-peer lending company Zopahas has raised £220m to grow its responsible and sustainable banking and lending services in the UK.

• Budweiser Brewing Group, the UK arm of global brewer AB InBev, and Protium, the leading UK-based green hydrogen energy services company, has teamed up to deploy zero-emission green hydrogen at the Magor brewery in South Wales, one of the largest breweries in the UK. They will invest more than £100m for a hydrogen generation system that will fuel the brewery’s production and also its key logistics assets, including heavy goods vehicles and forklift trucks.

• Getir plans to invest £100m to rapidly expand its sustainable and super-fast grocery delivery service across the UK, creating 7,000 permanent jobs in 2022. The business utilises a 100% electric fleet of delivery vehicles.

• HiPoint will invest £50m to create five new facilities for the recovery and processing of horse stall waste into reusable bedding, fertiliser and biofuels, creating 90 jobs across the UK.

• HyPoint will invest £6.6m establishing a headquarters in the South East for the development of its next-generation hydrogen fuel cell system, creating ten jobs.

• Crowdz will invest £5m to develop and launch an ESG platform based on blockchain technology, creating seven jobs in London.

• Treedom will establish a UK office in London for its online platform for planting trees, creating ten jobs.

• Tes Amm is creating 15 new jobs in Scotland, doubling its electronic waste recycling solutions for lithium-ion batteries from EVs, consumer electronics and IT and mobile technologies.

• Jacobs will create more than 150 jobs as it grows its high-tech Birchwood laboratory in Warrington, where the company carries out research and development, testing and cybersecurity operations that support critical UK national infrastructure.

• Huaneng will invest in the 50MW battery storage project in Stonehill. This greenfield project is a major new milestone for energy storage in the UK and will employ local partners in construction and operations.

Sofia Karadima is a senior editor and researcher at Investment Monitor, focusing on financial and business services, and ESG investing. She previously covered institutional investment across private markets for financial news and research provider Acuris. She has reported on private equity, venture capital, private debt and infrastructure, among other topics. Sofia is currently based in London, after living in Chile, Denmark, Spain and Greece.

The Future of the Insurance Market in the United Kingdom