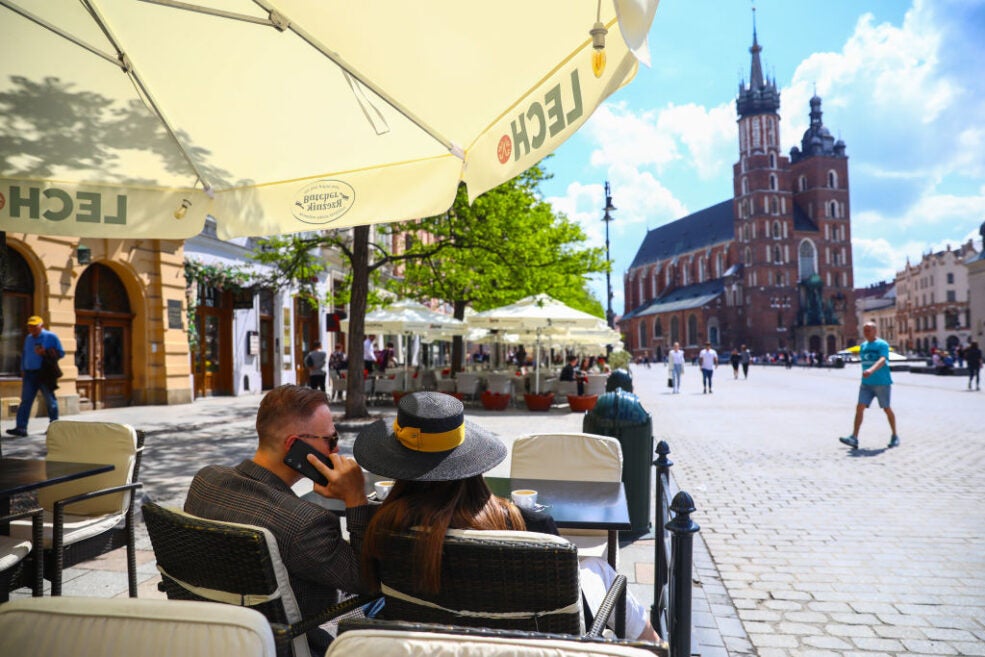 Kraków’s historic buildings have been recognised by Unesco and bring in tourists in large numbers, but the city is eyeing a more high-tech future. (Photo by Beata Zawrzel/NurPhoto via Getty Images)

Kraków is one of the oldest cities in Poland, dating back to the seventh century, and the country’s second largest. In fact, Kraków’s Old Town was declared a World Heritage site by Unesco in 1978 thanks to its well-preserved historic buildings.

Kraków has played a prominent role throughout Polish history, particularly since the Polish Republic was founded in 1918, when it began establishing universities and building upon the city’s cultural roots. During the invasion of Poland in the Second World War, Kraków became the capital of Germany’s general government before returning to Poland when the war ended.

This history bred an eclectic architectural style with Gothic, Renaissance and baroque styles sprinkled throughout the city with landmarks such as the Wawel Cathedral, St Florian’s Gate and the largest medieval market square in Europe, Rynek Główny.

Katarzyna Wysocka, director of the Department for Entrepreneurship and Innovation for Kraków, says: “As one of the oldest cities in Poland, the architecture is a mix of different historic times, and places such as Wawel [Cathedral], which were not destroyed during the Second World War, are authentic to that time.”

The city of Kraków continued to evolve by combining cultures, as Wysocka explains. “At the beginning of the 20th century all of these different districts and towns that were making up Kraków were incorporated into the city, but they maintained their own atmospheres,” she says.

This balance of preserving history and building towards the future by combining districts and establishing universities is an important part of Kraków’s DNA. The city’s economy continues to show examples of collaboration and innovation.

Older, more traditional sectors such as manufacturing, steel and tobacco are still important to the city, but it is service sectors such as business process outsourcing and research and development in high-tech sectors such as life sciences that are taking precedence in modern Kraków, while the city’s start-up scene continues to thrive.

As the chart above shows, service sectors are outpacing industrial sectors in terms of employment in Kraków.

“We are known for being the best city in continental Europe as far as business service sectors are concerned and we are certainly the best in Poland," says Wysocka. "The number of employees in business services [in Kraków] is bigger than Warsaw with approximately 80,000 people working in various branches of business services.”

Innovative service-based companies such as Google, IBM, UBS and HSBC all have a presence in Kraków. Yet in 2020, this blossoming sector was jolted by the Covid-19 pandemic. Demand for office space decreased by 15% between the first quarter of 2019 and the final quarter of 2020, according to real estate services company Jones Lang LaSalle (JLL).

The JLL Kraków 2020 report went on to state: “The outbreak of the pandemic slowed down the development of the business services sector, causing employers to revise their recruitment strategies and postpone expansion plans. However, this approach seems to have been temporary.”

JLL paints a positive picture for Kraków’s rebound in business services, while also highlighting that the city's industrial sectors are particularly resilient. According to the report, Kraków’s industrial sector is making a strong recovery from the pandemic. In fact, investment transactions had a total value of €156m ($181.8m) in the first half of 2020.

Such figures show that industrial sectors still play an important role in Kraków’s economy, with the likes of Heineken, Electrolux, Amway and Samsung manufacturing in the city. Yet, Kraków has a particularly strong focus on facilitating tech innovation, particularly in start-ups.

Wysocka stresses that Kraków places great emphasis on supporting its start-up scene, saying: "Apart from the old parts of Kraków, apart from the traditions, we really are a modern city and we want to be more and more innovative.

“There are many Kraków start-ups [and] companies like Brainly [a Polish education technology company] have become really well-known in the US. That is really important for us to have in order to build a reputation for start-ups.”

A crucial component for nurturing Kraków’s start-up hub is access to talent. The city is home to 24 higher education institutions and has approximately 200,000 students studying there.

In fact, Kraków is home to the oldest university in Poland, Jagiellonian University, which ranks second in the country for overall performance. Wysocka highlights that a focus on education is significant to Kraków’s wider economic strategy. “We want an academic atmosphere, and we want to develop science subjects in particular," she says. "The universities employ 12,000 scientific staff, which is really important because they are living here and creating innovation centres, technology transfer centres, and they are helping to create spin-offs to develop our students.”

A growing synergy between the universities, the city and businesses could be a factor in Kraków’s slow but steady population growth since 2013. Wysocka cites attracting more foreign students to study in Kraków as another leading priority for the city, with a view to launching a campaign in the coming year.

Investors and tourists returning to Kraków

Kraków has continued to attract tourists to the greater Malopolskie region, with visitor arrivals increasing steadily since 2013.

Wysocka explains that while protecting the tourism sector was an important priority for the city during the pandemic, attention has now turned to attracting investors.

“We have some key investment areas such as Nowa Huta [a strategic project designed to stimulate investment]," she says. "There is a logistics park, a science and technology park, green spaces with a view to hosting big open-air events, and then we have a large lake, which is very scenic.

“Alongside this, New City is an important development as it is the only place in Kraków where skyscrapers can be built. We have to work with our heritage rating, and we don’t want to damage the views of the city. So that area is exciting and new, but we are working on zoning it correctly.”

Kraków is consistently playing a balancing act of ushering in the new while still honouring its rich historical sites and cultures. However, while its culture and architecture have made the city a tourism hub in Poland, its economy is increasingly reliant on innovation and technology, and hopes are high that investors and talent will follow.

This is the sixth article in Investment Monitor's 'Future of Polish Cities' series, with the first looking at Łódź, the second Wrocław, the third Poznań, the fourth Gdańsk and the fifth Katowice. In the coming weeks we will profile Warsaw.

Ruth Strachan is a senior reporter at Investment Monitor, focusing on manufacturing, mining and commodities. She joined from the Financial Times, where she worked as a content editor in the events division FT Live. In this role she wrote content for various global events across a number of topics including FDI, technology, C-suite roles and compliance. Before this, she was a journalist at DC Thomson.

The Insurance Industry in Montenegro, Key Trends and Opportunities to 2020

Russia's economy is reeling from the corporate exodus, but apathy and cynicism remain