On 11 September 2022, the world marked 200 days of the continuous Russian invasion of Ukraine. The war, which has brought devastation and a horrific death toll, has been hugely distressing to follow, particularly reports from de-occupied areas concerning war crimes committed by the Russian army.

To supply the frontline with soldiers, equipment and weapons, Russia needs approximately $1bn a day, a substantial sum of money, and one obvious source for it is energy exports. At the same time, more than 40% of the Russian state budget is financed from corporate taxes. So another important source of income that Russia uses for the war against Ukraine is money paid by local and international businesses via taxes.

Why are foreign companies still doing business in Russia?

So where are we now, more than 200 days into the war, in terms of international businesses and their work in Russia? Did they leave the country or are they still working in Russia and paying taxes, thus contributing to Vladimir Putin’s war chest?

The answer does not bring much optimism. According to the KSE Institute, more than 1,600 international companies still work in Russia on a full or limited scale, generating at least $171bn of local revenue annually. Many of the companies remaining in Russia originate from prosperous democracies whose governments have pledged high levels of moral and other support for Ukraine. Currently, there are 296 American, 245 German, 107 French, 97 Japanese and 94 British companies still operating in Russia.

Ukraine Crisis
Florida stands to gain in next phase of data centre investment
Ukraine Crisis
Opinion: While EU and US act, UK is unprepared for winter energy crisis 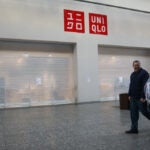 To date, only 105 companies have exited the Russian market completely. Three-quarters of multinationals that had the largest revenue in Russia in 2021 are still present in the country, even after 200 days of Russian aggression. At least 50 international companies with 154 production sites in various regions of Russia are still operating at a full or limited scale. Among them is Danone, with its 16 factories and a farm; Nestle, with its seven plants; and Lactalis, with its four factories.

The large number of companies remaining active in Russia stands at odds with public perceptions of a mass corporate exodus. That is because most of the companies that downscale and suspend operations do it loudly while eight in ten companies doing business at some scale in Russia have kept silent about it.

Why are multinationals silent on their business in Russia?

Another symptom of silence as the companies’ preferred communication mode came in mid-September. The globally acclaimed Business & Human Rights Resource Centre launched a new monitoring tool to enhance transparency around businesses’ human rights due diligence practices in Russia. A total of 400 multinational companies were invited to respond to a survey about human rights due diligence related to their operations and investments in Russia and Ukraine. Only 39 companies provided a response, indicating that few companies are willing to admit how little they have done to identify and address their connections to Russia’s violations of international humanitarian and human rights law, in line with their responsibilities under the UN Guiding Principles.

But even when so many companies choose silence, make no mistake: reputations of those de facto staying in the Russian market will suffer and these companies are creating more problems than they are profits. There are two ways in which they are sacrificing their reputations: by their negative financial performances, and by the efforts of the public to expose their operations in Russia.

The more other companies leave Russia, the more eyes will be focused on those who stay. It means more public pressure and more questions about the integrity of the remaining brands’ reputations. For example, Danish company Rockwool faced backlash in its local media as well as street protests in response to its decision to continue to work in Russia. Critics, as well as the B4Ukraine coalition, continue to push the company towards leaving Russia, hurting Rockwool’s reputation by highlighting unpleasant facts about its business in Russia.

Another example is French oil major TotalEnergies. The company was accused in a Global Witness investigation of being involved in the fuelling of Russian military jets via a co-owned venture in the country (which the company denies). These allegations came as news broke about a surge in the company’s profits from its Russian assets, thanks to soaring energy prices. Total faced immense public backlash and soon announced it would sell its 49% stake in TerNefteGaz. However, Total still owns 19.4% of Novatek, Russia’s second-largest gas producer and the buyer of the remaining TerNefteGaz shares. This acts as a reminder that even when you keep silent and carry on as usual, you are not invisible and the public will come for those who trample on humanitarian values in the quest for profits.

It also correlates with findings of the Edelman Trust Barometer report stating that six in ten people want businesses to punish countries that violate human rights and international law; 38% of people state they would lose trust in a company for not taking action regarding its work in Russia, and five in ten people would alter their behaviour towards a brand or a company based on its response to the war in Ukraine.

People know that companies have the power to influence geopolitical decisions, and they want them to do it – to be leaders and be active, to do the right thing and be on the side of good. There is no more room for business as usual. As money plays a key role in many geopolitical decisions, companies that wield money and pay taxes to state budgets have the leverage to fix situations that are unjust.

The war Russia has started in Ukraine undermines the rules-based international order, which is necessary for businesses and societies to prosper. This is why the B4Ukraine coalition calls on businesses to stand up for Ukraine – and simultaneously for the norms, standards and institutions of the international community upon which global stability and prosperity depend. This is why we call on businesses to leave Russia for good and deprive the state machine of money for war. And this is why we, and the public, must continue to bring to light facts about businesses that still work in Russia and push them to leave the country.