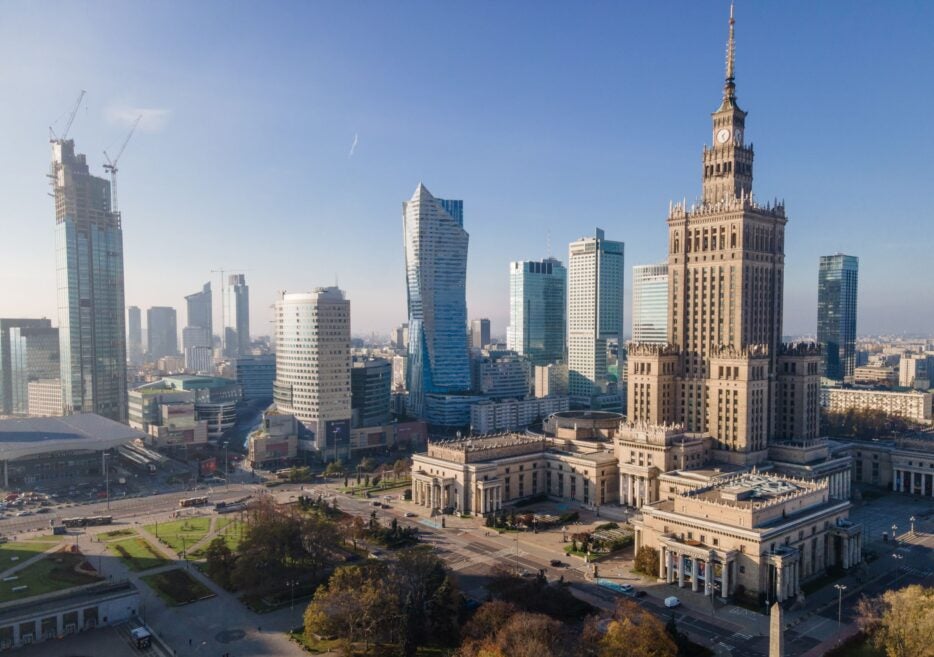 A drone view of the Palace of Culture and Science in Warsaw, Poland, taken in November 2020. (Photo by Foto Olimpik/NurPhoto via Getty Images)

Warsaw, Poland’s capital and largest city, is a visual mishmash of multiple European architecture styles and modern glass skyscrapers. It ranks behind only Frankfurt and Paris as the city with the highest number of skyscrapers in the EU, yet is also well known for historic landmarks such as the Royal Castle, King Sigismund’s Column and the Wilanów Palace. Once the richest city in the Russian empire, Warsaw remains a major centre for trade and investment.

The city has been shaped by significant moments in Polish history. Warsaw was the capital of independent Poland following the First World War, after almost two centuries of partitions, and was then left badly scarred by bombings and brutal oppression during Nazi occupation in the Second World War.

Despite the destruction wrought by war, Warsaw preserved its historic old town – which is a Unesco World Heritage site. Now the city is also home to a business hub, academic centre and cultural ecosphere.

What does China’s crypto crackdown mean for global digital currency?

Reconstructing and rebirth are in Warsaw’s DNA. The 19th-century industrial revolution saw the city rise to meet the demands of industry, which resulted in a booming population that is still growing. The seventh most populous capital city in the EU, Warsaw has a population that has been steadily increasing over the past two decades.

Karolina Zdrodowska, head coordinator for entrepreneurship and social dialogue for Warsaw says: “Warsaw is an extraordinary city which has a lot to offer both to those who come here as tourists and those who think about staying here for longer: working, investing, studying, opening a company branch or a new business. Everyone is welcome.”

Warsaw is an economic powerhouse, not just nationally but also across Europe. In 2019, Warsaw’s GDP was estimated at $105bn (418.6bn złotys), which ranked it as one of the wealthiest locations within the EU. The city also contributes approximately one-sixth of the total GDP of Poland. The Globalization and World Cities study group from Loughborough University has officially classed Warsaw as an alpha world city, alongside Sydney, Amsterdam and Seoul.

Warsaw is home to both houses of Poland's parliament and the Warsaw Stock Exchange (GPW), which turned 30 in 2021. The GPW is the largest equity trading platform in central eastern Europe.

Since the opening of the GPW, the city's business services sectors have seen extensive growth.

Services is comfortably the largest sector in Warsaw when it comes to employment and has seen steady growth since 2000. Business services employment has increased by 87% between 2016 and 2021 to a total of 33,000 workers – 88% of which were employed by foreign companies.

Key subsectors include business process outsourcing, shared services, IT, and research and development, with a total of 321 service centres, 77.3% of which have been created through inward FDI from British, Danish, French, German, Swedish, Swiss and US companies.

Bayer opened a digital hub in the city in 2021, designed to develop digital solutions for health and agriculture, while Moderna announced plans in the same year to establish a new international business services hub in Warsaw.

Zdrodowska says: “The dominant type of business services centre in Warsaw is a shared services centre or global business centre. They account for 42.4% of total employment in this sector. Just since the beginning of 2016, 105 new centres have been established in our city.”

As Warsaw continues to attract FDI flows, it has also set its sights on maintaining high levels of talent.

“Warsaw residents are well prepared for the challenges of the contemporary labour market, both in terms of education and the knowledge of foreign languages," Zdrodowska says. "Our academic centres attract young people from all over the world – nearly 30% of all foreign students studying in Poland choose Warsaw's institutions of higher education.”

There are 80 public and private universities in Warsaw including the Polish Academy of Sciences, the Warsaw University of Technology and the University of Warsaw – which is regarded as the best university in Poland. With approximately 218,000 students studying in Warsaw at present, 53,000 graduates enter the workforce annually.

Zdrodowska says: “As part of the Strategy #Warszawa2030, we have set out a goal of attracting more talent and leaders in the future.”

The strategy aims to attract both Polish and foreign students and promotes investment and cultural events in a bid to bring talent and future entrepreneurs into the city.

The city has always been synonymous with Polish tourism and up until 2020 it had consistently attracted high tourist arrival numbers.

Zdrodowska says: “Warsaw is a vibrant metropolis with modern public transport, numerous city attractions and a rich cultural and educational offer. Being one of the greenest European capitals (green areas account for more than 40% of the city), it offers a very high level of safety and comfort of everyday life, with over 90% of the inhabitants saying they are satisfied with the quality of life in Warsaw.”

Zdrodowska says the city is expected to rebound strongly from the effects of Covid-19.

“The situation seems relatively stable, especially in the streets of Warsaw, where entrepreneurship can be seen at every corner," she notes. "Entrepreneurs have learned to function in the new reality, and as the local government, we have made every effort to help them survive this extremely difficult situation that we have all been facing for over a year and a half.”

As the business services sector continues to attract high levels of FDI and tourists are expected to return in high numbers as international travel increases, the future of Warsaw looks bright.

This is the seventh article in Investment Monitor's 'Future of Polish Cities' series, with the first looking at Łódź, the second Wrocław, the third Poznań, the fourth Gdańsk, the fifth Katowice and the sixth Krakow.