Even if the agriculture industry is ready to adapt to carbon farming techniques, such processes are not the silver bullet when it comes to ending carbon emissions from the sector. (Photo by Jean-Francois Monier/AFP via Getty Images)

Decreasing the environmental impact of farming is both urgent and necessary. As it stands, agriculture is the second-largest source of greenhouse gas emissions, after energy production.

Carbon farming comes with its own set of flaws – poorly designed offsetting schemes, or difficulty measuring carbon levels in soil, to name but two – but it can be mutually beneficial to both the environment and farmers. What it is not, however, is the solution to achieving net zero.

However, carbon farming can be a tool for farmers, as a way to the change the manner in which land is managed, and a move towards more sustainable farming. 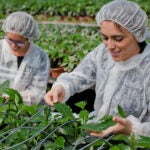 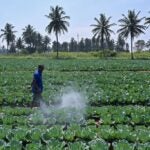 There is no denying that carbon is the big bad wolf of our time, and decarbonising farming and reducing its emissions is crucial. At the end of 2020, UK Prime Minister Boris Johnson announced a ten-point plan for a green industrial revolution, featuring carbon capture technologies and the goal of removing ten metric tonnes of carbon dioxide by 2030.

Luckily, nature comes with its very own set of carbon capture and storage solutions. Through conservation, agriculture farmers can improve soil’s carbon sequestration capabilities, which in turn helps to bolster soil health, boosting biodiversity, decreasing erosion and acting as a flood barrier, all helping to mitigate the climate crisis in the long term.

Furthermore, growing trees and shrubs along with crops or pastureland – a practice known as agroforestry – can also boost carbon sequestration.

The benefits are clear, but financial support is key

However positive for the environment, making these changes requires time and – let’s be frank – money.

The costs of changing cultivation methods and the fear of decreased yields are quoted by farmers as a reason to not adopt soil-friendly approaches such as no-till farming, according to researchers from The University of Nottingham in an article for academic community news outlet The Conversation.

Adopting a zero-tillage approach to farming could translate into a cut of 30% of greenhouse gas emissions, according to the article, but in the case of English farms, for example, only 7% farm without tillage.

When it comes to yields, the article points at research by the University of Cambridge showing that there are “no consistent differences in yield over the first ten years after a farm converted to no-till agriculture”.

Carbon farming is not the holy grail of climate change

This research is even more relevant when factoring in greenhouse gas emissions within an international context. Proof that emissions can be lowered and yields do not need to be affected means that food production, when adopting soil-friendly practices, can remain unaffected.

Ensuring that food production levels are not negatively impacted is important because if they were to go down, food imports would likely have to increase, which would translate to more greenhouse gas emissions as a result of the transportation required and the potential of importing food from places where the farming practices are not as kind to the soil.

All in all, the consensus is that carbon farming is by no means an end to the fight against climate change, but a tool that can help farmers and land managers take the necessary steps towards a more sustainable future.